The Lives of the Famous Architects Who Designed Our Retirement Community

Strolling through the breathtaking grounds at Winchester Gardens is an experience unto its own. Throughout the pristine 37 acres, one can discover fascinating bits of local history, appreciate magnificent architecture, and gaze upon the luscious landscaping that affirms this spectacular community is second to none.

Winchester Gardens’ awe-inspiring presence is no coincidence; its timeless beauty and historic grandeur are the result of careful planning and contributions by some of the region’s most famous architects.

Winchester Gardens’ fascinating history begins with a generous benefaction by Marcus Ward Jr., a prominent and wealthy politician and New Jersey statesman in the late 1800s and early 1900s. In his will, Ward—a bachelor himself—dedicated his entire estate to the formation of a home for “Aged and Respectable Bachelors and Widowers.” A board of trustees was formed, and after studying similar ancient and contemporary properties in Europe and New England, the trustees set out to design a historic jewel that would eventually be known as The Ward Homestead.

Pope, who originally planned to become a doctor, changed direction early in his educational career. After studying architecture and earning an undergraduate degree at Columbia University, he spent time honing his craft in Rome and Paris before returning home to work for Bruce Price, the famous architect credited with designing renowned Tuxedo Park.

Following Price’s passing, Pope went on to earn accolades of his own for notable structures such as the Temple of the Scottish Rite and Thomas Jefferson Memorial in Washington, D.C. In this time frame, he also collaborated on several high-profile projects with Olmsted Brothers, famous architects with a gift for landscape design.

Construction on The Ward Homestead began with clearing the grounds—once a 49-acre farm—in spring 1925 and was completed by 1927. Pope’s approach to early senior living design encompassed three structures that would house the original administration, dormitory, and service facilities, all oriented around an octagonal rotunda.

Giving testament to the exceptional quality, the 88-year-old tile floors bear no cracks or chips, and the original quarter-sawn paneling, hand-created stone, and brick patterns in the walls are fully intact. Today, the Great Hall is a focal point of the Winchester Gardens community and a popular gathering place for residents who enjoy fellowship and shared activities, much as the original guests did nearly a century ago. 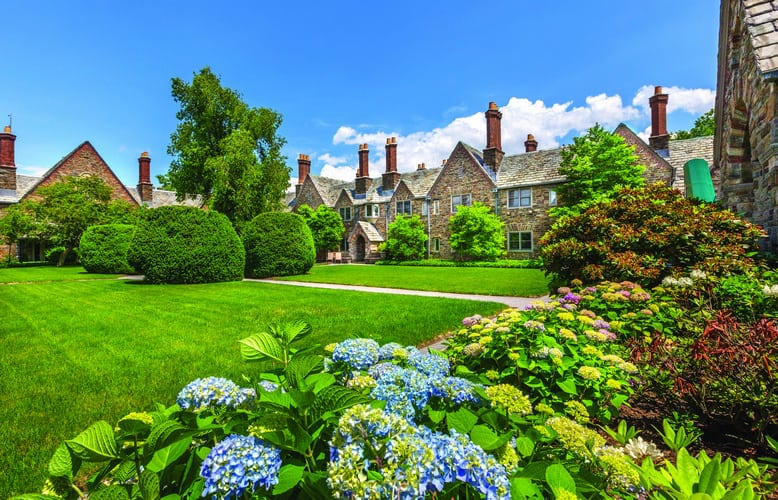 A fairyland to match

Only the best of the best could match the opulence Pope created, and that’s exactly who the trustees engaged to design grounds worthy of the stately new residence. Olmsted Brothers, the firm tapped to deliver on this tall order, was well prepared for the challenge. After all, predecessor Frederick Law Olmsted and his partner, Calvert Vaux, conceived the winning landscape design plans in an 1857 contest to create what is now New York’s world-renowned Central Park.

By the 1920s, the famous architect family had undertaken numerous prominent projects, including the U.S. Capitol grounds, multiple park systems, private estates, and the Niagara Reservation, and Frederick Law Olmsted’s son by the same name and another son, John Charles Olmsted, were making their own name in the landscape world.

Even so, the senior Olmsted’s influences remained apparent in the firm’s approach to design throughout its history. Crediting his own father’s love of natural scenery, Olmsted impressed upon his sons that functional landscapes could produce powerful, if subconscious, appreciation for the beauty. In other words, he aimed for design that would captivate in ways that couldn’t be pinpointed to a single element, but rather admired as a cohesively elegant whole.

This picturesque style was meant to celebrate peaceful elements of nature while soothing and restoring the spirit. Olmsted’s distinctive approach aligned perfectly with the needs of aging residents, and so his vision is evident in the captivating fairyland garden that continues to enhance the charming structure of the Great Hall.

Take a walk back in time

While luxury amenities and contemporary services make Winchester Gardens one of New Jersey’s most exclusive gated retirement communities, the historic influences add character and charm that simply can’t be matched. Arrange for a tour to experience a simultaneous step back in time and look at the possibilities for your own retirement future.

Resources to help you make your move.

Have questions about life at Winchester Gardens? Ask away!